The windmills of La Mancha

While our son cycles at high speed over the plateau of La Mancha on his steel steed Rocinante, we follow the trail of Don Quixote, a fictional figure originating in 16th-century Spanish literature, famous for fighting windmills. In his quest for independence, our son’s journey started a few days ago in southern Spain, in Malaga, and will eventually end in the Netherlands. But that is a different story for another time.

The rest of the family are grateful for the cool iron horseless carriage in which we travel while he climbs the Meseta (the plateau near Madrid).

Our quest for the story behind the story begins in the city of Ciudad Real, in the Museo del Quijote, a museum dedicated to our hero. Inside we meet a talking hologram of Cervantes and see interactive displays, paintings of the most important characters in Cervantes’s books and videos with 3D effects. There is a dress-up corner for children, a library, and a 17th-century printery in the basement. And best of all it is entirely free of charge.

Whilst we are the province of Ciudad Real, we find some more giants. The titanes is a project curated by Okuda San Miguel with a wide selection of internationally renowned artists to turn the silos into vast works of art.

But duty calls, we have to go and fight the real giants, which we find in Consuegra.

The windmills in Consuegra

Consuegra houses the famous windmills, which Don Quixote regarded as giants with long arms. They were operated as grain mills until deep into the last century. Nowadays, a few are open to the public for a small fee. Others have been transformed into shops. Together the giants guard a medieval castle standing on the top of the hill.

The fortress is open to the public, except during siesta, as understandably, even castles and giants need a rest during the hottest hours of the day. Especially here, four centuries after the publication of “The ingenious nobleman Don Quixote of La Mancha“, the book by Miguel de Cervantes, it seems as we are about to encounter errant knights and shepherds.

But the tarmac roads down in the valley are a rude awakening to the fact that we are in the 21st century, and we must move on to find out more about the life of our protagonist.

Consuegra is only sixty-five kilometres to Toledo. This place is known as the “City of the Three Cultures”. Here you will find Christian buildings, such as the cathedral, mosques (Cristo de la Luz) and synagogues, for example, Tránsito. It is one of the oldest cities in Spain and is on the UNESCO World Heritage List.

From the viewpoint of Mirador del Valle, you have fantastic views of this city.

The castle of El Cid, near Jadraque

We continue our journey to the north and leave Madrid to our left. Our son continues his journey through wheat fields and olive groves. It is hot. His sweat evaporates before it reaches the ground. This is a rite of passage he has to pass on his own, but occasionally he gets the company of flamingos and storks, who use the river La Guadiana as a base. They watch as he is tending to his umpteenth nose bleed. These follow each other in ever-increasing speed, as the dusty wind in combination with the drought erodes the walls of his young blood veins.

At the castle of El Cid near the town of Jadraque, he has to call it a day. The bleeding does not seem to stop anymore. It is time for some R & R, which he decides to take in the next town.

Sigüenza is a charming medieval town at an altitude of thousand meters, with an imposing castle that now houses a Parador (luxury hotel). Here, the narrow winding cobblestone streets alleys breathe medieval times. The university of this town is cited in Cervantes’ book.

But alas, our ways have to part here. We must say goodbye to our hero and his spiritual father, Cervantes. Don Quixote continued his journey towards Barcelona.

We proceed to verify that “The sun also rises” in Pamplona, following the footsteps of Ernest Hemingway.

The historic region of La Mancha is famous for its windmills, these have become world-famous due to the story of Don Quixote, written by Miguel de Cervantes at the beginning of the 17th century. La Mancha contains the central high plateau south of Madrid (meseta), flanked by the mountains of Toledo, Cuenca, the Sierra Morena and La Alcarria. The area largely  overlaps with today’s autonomous state of Castile – La Mancha.

Miguel de Cervantes  (1547 – 1616) is one of the most important Spanish writers. He wrote several plays, but is best known for his book Don Quixote by La Mancha.

Don Quixote is the protagonist, a hidalgo (lowest noble rank in Spain), in the novel written by Miguel de Cervantes “The ingenious nobleman Don Quixote of La Mancha”. He is an idealist and a fool with good intentions. He has lost his mind by reading too many knight novels. Thinking that he himself is an errant knight, he leaves his house under the name Don Quixote of La Mancha (his native region) and starts wandering over the roads and countryside of Spain. Source Wikipedia

Dulcinea is the imaginary love of Don Quixote. In ‘real life’ she is a farmer’s daughter living in El Toboso. Although he never personally met her, he is in love with her. He calls her Doña Dulcinea del Toboso and considers her a noble woman.

Sancho Panza is the illiterate but more realistic ‘squire’ of Don Quixote. In ordinary life he is a farmer and lives in the same village as Don Quixote.

Rocinante is Don Quixote’s noble steed, at least that is what Don Quixote believes he is. In reality, it is an old nag. Rocín in Spanish means workhorse but also illiterate and rough man. Antes means before in Spanish.

Rodrigo Díaz de Vivar was a well-known Spanish knight from the eleventh century. He is better known under the name El Cid, the Spanish pronunciation of sayyid (Arabic for ‘lord’). He of the eldest son of Cardinal Mendoza. The castle near the town of Jadraque is known as the castle of El Cid. It is a huge fortress of nearly one hundred meters long.

Don Quixote thought the windmills in La Mancha were giants, against which he started a fight. A hopeless struggle. This is where the expression comes from: tilting at windmills. Trying to change what cannot be changed or a hopeless struggle.

Hotel Parque Real is close to the city centre. The rooms are excellent, and the hotel is conveniently located close to the Don Quixote Museum.

In Sigüenza we stayed at Hostel Doña Blanca. The hostel has nice rooms, a good breakfast buffet and is located in the city centre, with plenty of opportunities to park around the corner.

The four-star hotel Parador Sigüenza is an exceptional location. The hotel is housed in the castle. The hotel has a beautiful terrace and is conveniently located on top of the city centre’s hill,

The Parador Toledo is located four kilometres outside the city with beautiful views over the city. 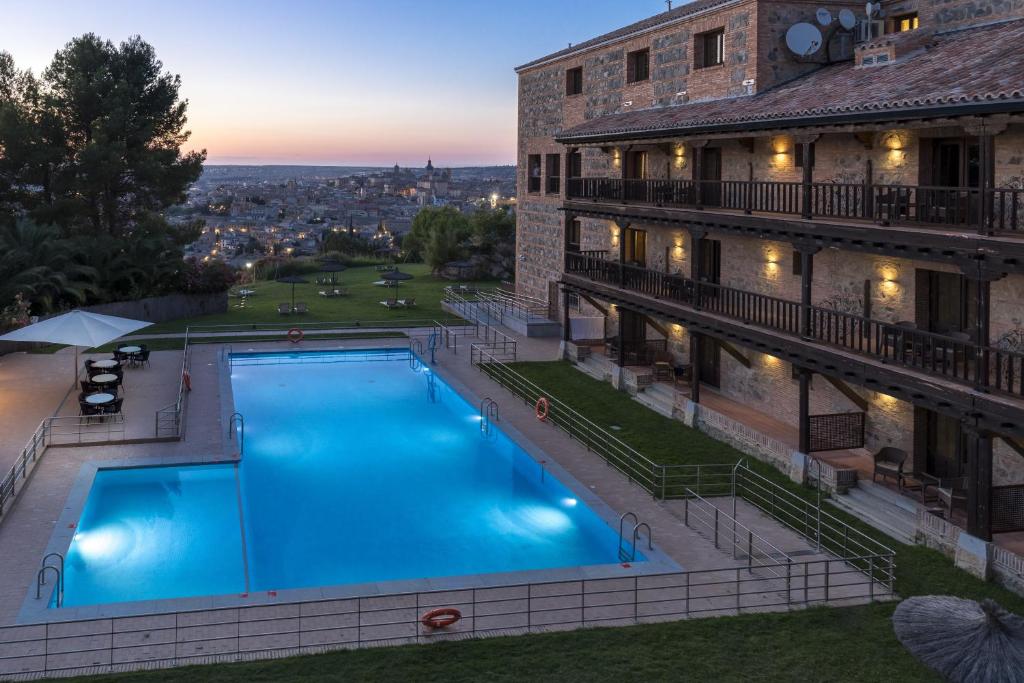 The Top 5 sights of Sensational Seville

Seville in Spain is sensational. Discover world heritage sites, the best hotels, activities and tips for a fantastic city break.

A bike ride from Malaga to Rincón. Discover the marina, beach, and attractions. A great trip to make as a family.

Jaén, Úbeda and Baeza SightseeingJaén, Úbeda and Baeza and the renaissance The cobbled streets of Baeza are deserted during the festive season at the end of the year. The locals are probably at home with their families celebrating, whilst mass tourism has yet to...
Read More

Benalmadena, enjoy the best views of the Costa del Sol

Enjoy the best views of the Costa del Sol at Benalmadena with a spectacular 15 minute trip in 4-seater cabins from the coast to the peak of Mount Calamorro.

Cordoba, kayaking into the sunset

The sun is going down, whilst your kayak slowly moves towards the historic Roman Bridge of Córdoba, spanning the Guadalquivir.

Medina Azahara was once an emblematic Arab Muslim medieval town. The city consisted of government and religious buildings, gardens, workshops, houses and of course the caliph’s residence.  It was built between 936 and 940 by caliph Abd-ar-Rahman III of Cordoba.

Is Castrillo de los Polvazares the most beautiful village in Spain?

Castrillo de los Polvazares is less than an hour away from the city of Leon and is located on one of the most important touristic crossroads in Spain.

Mulhacen Sierra Nevada: The long hike to the top of Spain

How to hike up the Sierra Nevada in Granada Spain, a first-hand account, with route, tips, advice and what not to do.

The south of Spain has not changed that much since Gerard Brenan first published his autobiographical book ‘South From Granada´ in 1957.

A catamaran tour into the Malaga sunset

Imagine sailing on a crewed catamaran with friends, a light breeze, crystal clear sky and the sun is about to set.